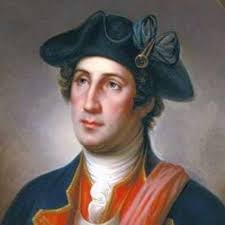 George Washington: Role Model Leadership
On January 6, 2020 a nightmare the Founding Fathers would never want to occur, happened.  The nation's Capitol was stormed and murder and mayhem committed.  History is littered with mob violence against governments. The French Revolution comes to mind.  Thousands of peasants tired of famine, rose up against an elite, ruling class that was ignoring the basic needs of its people. The irony in what happened on January 6, is that a fringe element of mainly average means Americans incited violence and criminal acts upon our Capitol to support an elitist President who spent  four years in office prioritizing policy and legislation that caters to the uber wealthy.  He achieved this appealing to the angry, disenfranchised, mainly white voters who felt they were losing power and opportunity.  Hence, the motto "Make America Great Again." His mode of communication involved name calling, bullying, and lying.  He achieved his goals for the wealthy class while convincing his supporters he was working for them.  History also has its share of ruthless dictators. It is a fact that Trump's support of two of the most cold blooded dictators in modern history:  Vladimir Putin and Kim Jong-un is no coincidence.  Why should the American people have expected Trump to peacefully turn over power to his successor?  Children are taught: birds of a feather, flock together.  If you want to know about a person, look at who their friends are.  The American people should and did see it coming. The Capitol police were complicit in the insurrection. These are ugly facts demonstrated by videos, selfies and the common sense logic that in 2019 the United States spent $718.69 billion dollars on military spending,  but on January 6, 2020 law enforcement could not stop a small group of lawless Trump supporters from breaching the Capitol.  Trump's lack of leadership is to blame.
George Washington strove for virtue. In the 1700s, virtue was defined as a gentleman's calling to better the world through selfless acts of public service. He lived this first through his military service in the French Indian War, followed by incessant service in the Virginia commonwealth legislature, Continental Congress, Commander of the Revolutionary forces, President of the Constitutional Convention, and President of the United States.  One need not question Washington's motives for public service, his sacrifices and personal conduct prove his character.  Washington learned through the failures of the French Indian War (he lost 2/3rds of his force under General Braddock in the Battle of Fort Duquesne ) that to win a war,  it is a strategy of marathon endurance. He never gave up, but stuck it out through the British takeover of Boston, New York City, and Philadelphia when many leaders would have given up and fled.  As a young man in his 20s (see pic above), he learned the value of scouting and Indian alliances that would prove so critical to the success of the American Revolution.  It is highly unlikely that George Washington would have been chosen General in today's modern era.  When the Continental Congress voted on him, he had not donned a uniform in over 20 years and his resume boasted of losing a battle(Fort Duquesne)  where two thirds of his men perished. Yet, he was the perfect choice to lead.  He learned from his mistakes. He was humble, honest, and reserved. His was a world where actions speak louder than words.   In an age where victorious military leaders became dictators (his counterpart Napoleon Bonaparte), he possessed the heart and wisdom to rule productively. This meant that one's leadership should create a model for successive leaders to step down after accomplishing a legacy of  altruistic improvement for the good of society. Washington chose not to engage in vitriolic politics. His stoicism kept him above the fray. He focused on creating the framework for our fledgling, young country which eventually developed into the model democracy much imitated and envied across the world.
So when choosing leaders, we must learn from our country's history.  A leader whose mission is virtue- the selfless sacrifice to better the plot of humanity is key.  As George Washington  proved, actions do speak louder than words. Experience is also key to having the best odds for making the soundest decisions. Good government is not happenstance. It comes from wise leaders, sacrifice and discipline for common good.  Had George Washington been alive today, he would have never approved of Trump's bombastic rhetoric and failed business acumen evidencing unsound judgment.  We can rest assured that his spirit is turning over in its grave in the wake of today's tragic transition of power.  We must remind ourselves of who we are and what we represent to the rest of the world.  We must honor the principles of The Father of our Country and get back to leadership that is representative of honor and virtue.
Posted by Mimi Coffey at 12:05 PM

Mimi Coffey
I am a life long criminal defense attorney, born to defend the rights we are all blessed with in this great country.